The Christingle and lights on service was a great success this year. It was led by Fiona McBride a worship leader who comes from Cross House. When people arrived they had the chance to make their own Christingle.  She told the nativity story but related to football teams, told us about the true meaning of the Christingle and got the congregation involved. We also had an amazing performance of ‘Feel My Love’ from the Uplawmoor Primary School Choir.

After the service, everyone gathered outside around the tree to sing carols. Sadie the organist played the keyboard while we projected the words on the front of the church for people to sing. Then a big countdown and the lights turned on on the tree. One of the youngsters who got some of Fiona’s questions right was allowed to help turn on the lights.

The hall was decorated with fairy lights strung on the ceiling and a christmas tree. Everyone was invited to go into the hall for Mulled Wine, Roast Chestnuts, Hot Chocolate and Sweets after the lighting of the tree.

Overall. I think the night was a great success and everyone appeared to have an amazing time. 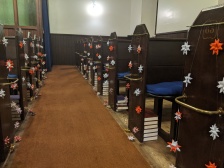 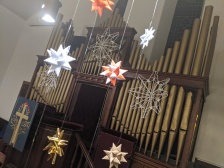